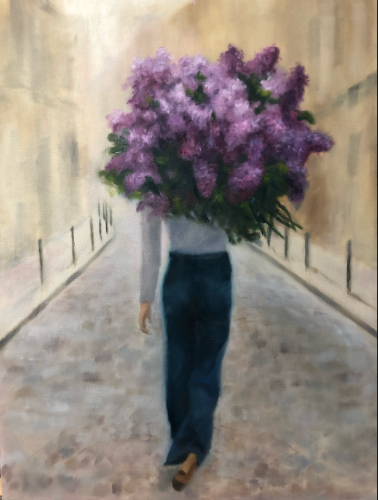 When I first selected this photo I thought of a million different ways I could emulate a million different stories. From what I have learned over the years, art is essentially another form of storytelling. This is primarily what I focus on for each piece I do, but this time I decided to challenge myself. I often refer to myself as a perfectionist and this tends to show through my art, especially as I have learned new skills and have gotten better over time.

Although I had the basis down for what I wanted to encapsulate, the sketch looked relatively generic in its beginning stages. But I wanted to show something more with my skills as opposed to just a portrait of a woman carrying flowers as that could be seen through the photograph. The reference photo showed the woman walking down a cobblestone path through a city. Her surroundings were very clear as was she but instead of obsessing over every minor detail of the building and carefully adding in each stone and petal, I decided to allow myself a space for more creativity. The background is not intended to be clear cut buildings but rather the impression of them. This way, spectators can imagine their own situation and setting and the attention focuses more on the women as opposed to her surroundings. This was the same thought process I had when adding in the stones. When I tried placing them in the same meticulous pattern as the photo showed, I realized that it took the attention away from my focal point. It was best to add in similar shapes and colors that gave the impression that the stones were there so more thought could be placed into the movement of the main woman, who I allowed myself to obsess over details with just a little bit. I wanted those who view this painting to create their own stories. Maybe they can gather a feeling, or wonder where this girl is going and why. It also could just be a nice picture. It all depends on who is viewing it and what lens they are using.

Overall I found this painting to be a fun challenge. It was difficult to break past my perfectionism and old habits to allow myself room to grow as an artist. Once I came to terms with the fact that not every insignificant detail has to be included, everything fell into place, and areas I was struggling in before came to me much easier. Sometimes the best thing to do is accept that not everything is going to be perfect. I started out with one expectation that I believed was my all or nothing but later came to the conclusion that I was much happier, both with the process and the final piece, when I stopped worrying about making a minor mistake, but rather embracing it as a part of my story behind the painting.